Images of the face are striking, whether they are snapshots or carefully composed portraits. They are used to identify and control us - in our passports or through automatic face recognition.  But they are also used in protests - particularly marches protesting the disappeared. What is it that makes these images so powerful?

After September 11, the streets of Manhattan were filled with missing posters, pasted to every available surface-café windows, hospital walls, phone boxes, railings, and lamp posts. And they remained in place for several years - long after it was clear that these missing people would never return.

When we see an image of a face, one of our first impulses seems to be to try to read the face—to imagine what it might tell us about what the person is thinking or feeling, or even what it might say about what they’ve been through.  We operate with some notion of the person hidden behind the face, or the face as a window of the soul. Suzanne Opton’s images of Iraq veterans were looked at that way in a discussion in the pages of the Review of International Studies.  Most of those who commented on her photos noted that various emotions could be read into the faces, and that we couldn’t know the right interpretation. However, the piece by Chris Brown was different. He argued that the images affected us in another way:  they appealed to us more directly. Though we have no idea who these people are or what they’ve been through, seeing their portraits, Brown tells us, prompts us to wish them well. In my words, it prompts a reaction of sympathy or empathy, and a recognition of a shared vulnerability.

In part, this response is arguably to do with the peculiar temporality of the photograph, which shows us something that has been but is no longer. A photograph survives its subject. But in addition, as we look the subject of the photograph in the eye, something happens on a person-to-person level, something beyond words, and beyond ‘making sense’.  We are moved.

When we interact with others on a day-to-day level, it is not a still image that we encounter, but a moving face - a face that is ‘moving’ in more ways than one. the facial muscles move, but we are moved emotionally too.  Interestingly, recent work in psychology argues that facial expressions do not reflect internal emotional states - indeed, the expression may produce the emotion rather than vice versa. And recent neuroscience has laid new emphasis on interaction.  Work on what are called ‘mirror neurons’ shows that when we interact with each other a complex process takes place. We respond to each other almost subliminally, through systems in the brain that react to what other people are doing as if we were doing it ourselves.  In some sense, we feel each other’s actions and intentions - we feel each other’s pain, even.

This exciting work leads neuroscientists to propose that human beings are wired, not for competition, but for empathy.  The political implications of this view are potentially huge. They reinforce the view that we should no longer be asking how we should live together, but rather, how come it is that we think of ourselves as separate in the first place. What political and economic systems make us think that way? If we are not by nature separate, distinct individuals, but interconnected with each other on this very basic level, what does that mean for politics?

The face, in current political and social life, acts as a means of identification: it pins us to our public identity, as separate individuals, through face recognition technology, through our passports, through criminal records. We recognise each other through our faces. Our current politics is indeed a face politics.

The moment that a cosmetic surgeon begins to strip away the face in French  performance artist Orlan’s Omnipresence, New York, 21 November 1993.

What would a politics that didn’t work like that be like, a politics without the face?  Some of the most horrifying images to come out of the First World War were images of soldiers with facial injuries. These images were so difficult to look at that they were just not shown. Images of amputees were common, but not those of men with their faces blown apart -a frequent injury in the trenches, and again today given the effectiveness of body armour. Much surgical expertise goes into treating such injuries—in civilians as well as military personnel - and, on a different register, into cosmetic surgery to correct minor ‘defects’ of appearance. Why is it that those with a facial disfigurement feel obliged to hide? Why do we find them so difficult to look at?

Is this because of what the face does?  Does it conceal the fact of our profound vulnerability, the fact that beneath all show, all distinction, we are just flesh and bone, vulnerable to death and disfigurement and yet deeply connected, one with another? The disgust we feel at the sight of a facial disfigurement reflects the way we rely on the face as a signal of separation - the sign of the individuality and distinctiveness that could be said to be the founding myth of contemporary politics.  A politics without the face disturbs and challenges notions of self and other, and the separation of the two. A politics of relation takes the place of a politics of individuality.

Photo by JR Korpa on Unsplash 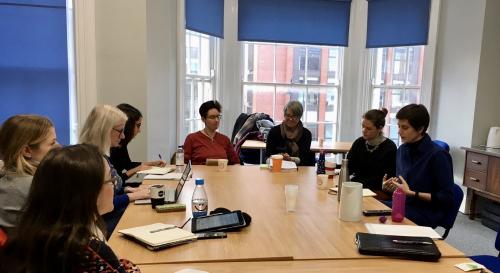