BISA trustee and Head of School for Leeds University's Politics and International Studies, Professor Richard Beardsworth, takes us through his thoughts on the recent COP26. What was achieved and what will be done as a result?

I was a member of the delegation from the University of Leeds at COP26 and spent most of my time in the Blue Zone (the space accredited by the UNFCCC). ‘Reporting back’ to BISA as a member of its executive, I offer the following reflections on the conference.

A quick re-cap: Within the UNFCCC process, the conference of the parties in Glasgow served to review and ratchet up the pledges made by the 197 countries signatories to the Paris Agreement in 2015 (COP21). In this regard COP26 was made up of 1) the negotiating agenda, and 2) theme-based initiatives (finance, nature-based solutions, transport, etc.) that dovetailed with and supported the negotiating agenda. Whilst separate (negotiations remain, for example, closed to observers except through the plenary meetings), they will be addressed together here.

Since the end of COP26 there has been much media coverage and commentary focused on whether the political meeting was a ‘success’ or a ‘failure’. Since any measure of success or failure depends on initial expectations or leading rhetoric (‘The one-minute to midnight’ of the UK prime minister, for example), I take here a pragmatic, forward-looking approach towards both what was achieved and what requires immediate action. |I suggest that it is not for nothing that the mantra of the conference became ‘a decade of decision’.

From where I was observing, five important things:

First, science was at the very heart of the conference. With the publication of the IPCC 1.5°C special report in 2018, the emergence of international climate movements like Fridays for Future, and the Sixth Assessment report (Physical Science Basis), there has been accelerating pressure on governments ‘to follow the science’. Throughout the conference—and increasingly so in the last week—all political and policy initiatives were explicitly aligned with climate science modelling and targets. This is a very important gain: with regard to climate, government and civil society are now speaking the same language.

Second, and as a result, the focus of the negotiations was no longer on 2°C average global temperature increase by 2100, but 1.5°C. Countries in full stage of development like China and India always negotiated to keep to the terminology of the Paris Agreement (2°C working towards 1.5°C), but the final document, the Glasgow Climate Pact, is diplomatically clear: ‘[the conference of the parties] resolves to pursue efforts to limit the temperature increase to 1.5°C’. Since the science has also made it clear that 1.5°C is only possible if there is a 45% reduction of global emissions by 2030, the agreed horizon of action coming out of COP26 is less 2050 than 2030. Or, put differently, it is now understood among the parties that achieving 45% reductions of emissions by 2030 is a necessary condition of the possibility of reaching netzero by 2050. Science-based policy will therefore increasingly target 2030. These science-driven normative and political shifts from 2°C to 1.5°C and from 2050 to 2030 are critical. It is why COP26 – whatever the disappointments - will be remembered as instigating a decade of decision.

Third, the gap between these targets and present national commitments (nationally determined contributions or NDCs) is such that the world is at present on a trajectory of 2.4°C average temperature increase by 2030 (by the end of the conference the gap had been closed by 25%). It was nevertheless negotiated, in alignment with the science, that all commitments would be reviewed, not in five years’ time following the Paris Agreement, but in one year, at COP27 (Sharm al-Sheikh, Egypt). Indeed, closing the gaps between target and commitment and between commitment and action will become a priority for each of the following years of this decade. One can perceive this as either ‘kicking the can down the road’ (the understandable reaction of anger and frustration from the most vulnerable countries, NGOs, and the climate justice movement) or an acceleration of the politics of ‘ratcheting up’ climate ambition and climate action on the basis of present science.  This decade of decision will decide which is closer to reality (with untold political and social consequences either way).

Fourth, given both the science and climate realities now, this conference not only focused on mitigation (reducing the above gaps), but had to strike a formal balance between mitigation and adaptation (in particular, capacity building for those countries on the frontline of severe weather events). For many, that balance was initially struck with the doubling of adaptation finance on the part of developed countries to the developing countries and with the agreed equal allocation of climate finance to mitigation and adaptation strategies. That said, the inability of the developed countries to meet their pledge of $100 billion per annum by 2019 (the so-called ‘green fund’) resounded throughout the conference as a fundamental breach of trust among the parties. That the developed world did not guarantee a fund for ‘loss and damage’ among the most affected states also underscored the credibility gap. From an international relations perspective, however, the fact that COP26 tabled ‘loss and damage’ for the first time on the final agreement and that a language of ‘obligation’ replaced that of ‘solidarity’ indicates that the post-industrial capitalist world has, in essence, assumed moral responsibility for the climate destruction of the most vulnerable. Action during this decade will decide whether this moral assumption of responsibility translates, politically and financially, into the public and private channeling of trillions of dollars from the North to the South.

Fifth and finally, each of these gaps (emissions, adaptation finance, loss and damage, credibility) requires leadership to close them. It was clear from the conference—however exclusionary the negotiations themselves—that it is governments that will bring about systemic change to achieve the scientific targets, but that change is only possible if governments are simultaneously allied with businesses, cities, regions, and civil society at large. Each sector initiative—regarding energy, finance, transport, industry, building, and land use and ecosystems—reiterated the vital importance of these decarbonisation alliances (public/private partnerships, coalitions of the willing, etc.) for the work of implementation to be done in time and at scale. The conference thereby indicated that the normative language of 1.5°C and 2030 will be adopted by a majority of the leaders of society focused to date on netzero. Immediate problems were posed throughout the conference as challenges and opportunities (for jobs, for inclusion, for just transition). Following the science, every year was understood to matter. What is still required are the consequent decisions, decisions that are the very definition of leadership. The mention of fossil fuels in the final decision document, on the one hand, but the watering-down of the ‘phase-out’ of coal to ‘phase-down’, on the other, suggested to me that this leadership is there, but remains beholden to the intergovernmental process of compromise.

What is immediate action from out of COP26?

Following on from the above, I would emphasise four action points:

There was a lot of disquiet during COP26—including the mass march on the first weekend of the conference—on who was included and who excluded in the negotiating process, redrawing lines between government power and people’s power. If COP26 is to open up a decade of positive decision-making, the synergies among all the climate actors (governments, corporations, international institutions, cities, regions, and civil society), together with the alignment of climate science with the SDGs, will need to intensify—so that a social and political tipping-point is reached (in contradistinction to the physical ones). This acceleration will require massive and enduring social mobilization. COP26 underlined how important both political leadership and protest will be in this decade of decision—together. 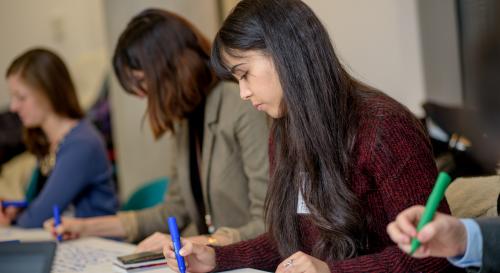